Throughout July, British Airways will resume flying to more destinations across its network, albeit offering fewer frequencies due to reduced demand and the impact of the global quarantine restrictions.

Across the UK and Europe, the airline will return to more shorthaul destinations by the end of July, including Austria, Bulgaria, the Czech Republic, Croatia, Denmark, France, Germany, Greece, Hungary, Iceland, Ireland, Italy, Kosovo, Morocco, Norway, Portugal, Spain, Sweden, Switzerland and Turkey. Domestic flights will resume between London and Belfast, Inverness, Jersey, Manchester, Newcastle and Newquay and the airline will move to double daily services to Edinburgh and Glasgow.

British Airways will also return to a small number of its normal longhaul routes by the end of July. Services will resume across the Americas including flights to Bermuda, Dallas, Miami, Seattle and Toronto. These join flights to San Francisco, which restarted in June along with destinations served throughout, including Boston, Chicago, Los Angeles, New York (JFK) and Washington, with a very reduced schedule. The Caribbean will also see British Airways return from July to Barbados and Kingston.

Joining Hong Kong and Singapore in the Far East (which again, the airline resumed limited flying to in June) will be services to Haneda in Japan.

Please note, some destinations may be serviced via different UK departure points than previously, for instance shorthaul routes from LGW are currently scheduled to depart from LHR. Do consider the departing airport when booking, and ensure customers are aware of this information before commencing their journey. 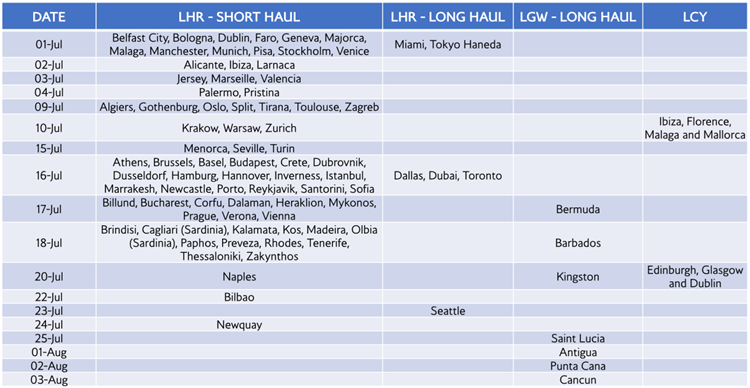 TRAVELLING SAFELY ON THE GROUND AND IN THE AIR

Safety is at the heart of British Airways business and the airline has introduced a range of measures to keep its customers safe and is asking passengers to abide by the new measures to help manage the wellness of everyone travelling.

The airline is cleaning all key surfaces including seats, screens, seat buckles and tray tables after every flight and each aircraft is completely cleaned from nose to tail every day. The air on all British Airways flights is fully recycled once every two to three minutes through HEPA filters, which remove microscopic bacteria and virus clusters with over 99.9% efficiency, equivalent to hospital operating theatre standards.

Alex Cruz, British Airways’ Chairman and CEO, said: “Following months of lockdown and stress, we know people will want to travel to be reunited with friends and family and to take a well-deserved break. We have put in place measures – to UK Government and aviation regulator standards – to ensure we’re doing all we can to protect the wellbeing of our customers and colleagues and we’ll be asking them to play their part in that too.”